BIRD stands for the Baschirotto Institute of Rare Diseases http://www.birdfoundation.org/  This institution is in Italy, near Vicenza in the north.  For many years, IPWSO has had a close working relationship with BIRD and the Baschirotto family, and BIRD has become central to IPWSO's ability to provide free diagnoses for children and adults with PWS, particularly those coming from countries where this is not available.

The story behind BIRD is simple.  Anna and Guiseppe Baschirotto had a son born with a rare disorder for which, at that time, there was no cure.  When their son, Mauro, died, Anna and Guiseppe determined that they would help as many families where children were born with a rare disorder, as possible.  They instigated the BIRD foundation in 2004 (picture above) where not only there is an internationally recognised laboratory for the diagnosis of rare diseases, but also a rehabilitation centre for therapy and attention.  Currently, there are free diagnoses for 5 molecular disorders including PWS http://www.birdfoundation.org/Eventi/2009/diagnoses%20free/International%20Support%20-%20Poster.pdf

IPWSO's Chief Executive, Giorgio Fornasier, brought BIRD to our attention back in 2004 and, with the support of Pfizer's sponsorship, IPWSO has been able to offer free diagnoses to countries throughout the world, and has now done this for over 140 children and adults.

Sending a blood sample is easy.  All that is required is a drop of blood on blotting paper, and post this in the mail to the clinic.  If you are aware of anyone requiring this, in countries where diagnosis is not freely availabale, please, in the first instance, contact Giorgio Fornasier: g.fornas@alice.it

And in our March 2009 Wavelength. http://www.ipwso.org/wavelength-newsletters/

I would like to talk about self-harming in PWS.  I know there is academic interest in self-injurious behaviour in PWS, but remembering that I am not a medical person, my conjecture and thinking comes from purely a parent's point of view, so if you can bear to read a lengthy post, here goes:
Some conjecture and thinking
Usually self-harm in PWS is connected with skin-picking, particularly where the picking is intensive and becomes harmful, not allowing the wound to heal.  It is also associated with the high pain levels characteristic of the syndrome, coupled with an element of boredom and often elevated anxiety.  Clinically it is dealt with in a variety of ways including anxiety-lessening medication, special bandaids, aloe vera for healing properties, and giving the person something to do with their hands. We are all well aware of this characteristic and have learned over the years to deal with it, one way or another.
It is generally regarded that those with the paternal deletion will skin-pick more than those with the maternal disomy.  My daughter, Francie, has the mat. disomy and doesn't skin-pick very much at all.  However, when Francie was 24, she started to show some other alarming self-injurious behaviour (head-shaving, pushing a needle completely into her arm; and cutting when she could find an instrument sharp enough) and I began to wonder whether the same psychological reasons for self-harming in the normal population could be attributed to those with an intellectual disability.  As a parent, I always want to know more.  I want to know what is going on for the person, what’s happening in their heads, what are they anxious about, why are they bored, is self-harming just an endorphine rush they’re after, is there something we can do as carers, or is it just a clinical thing we have to accept?  After looking through many internet sites, I have summarised my findings below.
Self-harming in the normal population[1]
Self-harming in the normal population is not uncommon.  Those who self-injure do not suffer from any recognised form of mental illness, although many people with mental illness have a higher risk of self-injury.
The key areas of illness which exhibit an increased risk include depression, phobias and conduct disorders.  There are other areas of risk in the normal population such as abuse, a punitive environment, bereavement, troubled parental relationship, and other social factors.
Psychology
Although the person may not recognise the connection, self injury often becomes a response to profound and overwhelming emotional pain that cannot be resolved in a more functional way.  It provides temporary relief of intense feelings such as anxiety, depression, stress, emotional numbness and a sense of failure or self-loathing. It can become the only way to manage emotional pain.  The release of endorphins, creating a short burst of pleasure, can become sought after repeatedly if the initial problem has not been resolved and this becomes a means to managing the emotional pain.
The model below shows two motives, hyperstress and disassociation.
·         Hyperstress can cause a person to want to opt out, to avoid contact with reality and  to concentrate solely on their ‘self’
·         Disassociation may be described by the person as feelings of emptiness or numbness, feeling detatched from life, and feel the need for physical pain as a   relief from these feelings – to help them function again.  ﻿
﻿

Motives
Psychiatric and personality disorders are common in individuals who self-harm; depression and other psychological problems.  Explanations for self-harm are difficult to analyse or even understand.  Many people say that they wanted to punish themselves.  Most use self-harming as a coping mechanism.
Is it reasonable to assume that any of these explanations could be the same in the PW population?
Self-harming in the PWS Population
Two things that we do know may help shed some light on this:
·         The older female population (20-30 year olds) with the genetic diagnosis of maternal disomy, show a tendency toward psychotic behaviours
·         There is a cross-over into the Autism spectrum for behaviour
From a paper on autism, I found some suggested causes and wondered whether these might be attributable to PWS as well:
·         Genetic        Self-injurious behavior is also common among several genetic disorders, including Lesch-Nyhan Syndrome, Fragile X Syndrome, and Syndrome. Since these genetic disorders are associated with some form of structural damage and/or biochemical dysfunction, these abnormalities may cause the person to self-injure. Most commonly in this group, these self-injuries are self-biting (lips, fingers, around mouth) and face-hitting.
Could PWS, also a genetic disorder and associated with damage to the hypothalamus and psychological dysfunction, presuppose a cause for self-harm?


·         Arousal
It has often been suggested that a person's level of arousal is associated with self-injurious behavior. Researchers have suggested that self-injury may increase or decrease one's arousal level.
·         The under-arousal theory states that some individuals function at a low level of arousal and engage in self-injury to increase their arousal level (Edelson, 1984; Baumeister & Rollings, 1976). In this case, self-injury would be considered an extreme form of self-stimulation.
·         In contrast, the over-arousal theory states that some individuals function at a very high level of arousal (e.g., tension, anxiety) and engage in self-injury to reduce their arousal level. That is, the behavior may act as a release of tension and/or anxiety. High arousal levels may be a result of an internal, physiological dysfunction and/or may be triggered by a very stimulating environment. A reduction in arousal may be positively reinforcing, and thus, the client may engage in self-injury more often when encountering arousal-producing stimuli (Romanczyk, 1986).
In PWS, this second theory would clearly relate to different forms of arousal such as temper flare, trashing, smashing, injuring.

The following interventions suggested are related specifically to Autism and not necessarily PWS.

Intervention
1.      If the person is under-aroused, an increase in activity level may be helpful. For example, an exercise program can be implemented (e.g., stationary bicycle).
2.      If the person is over-aroused, it is recommended that steps be taken, usually before the behavior begins, to reduce his/her arousal level. This may include: relaxation techniques (Cautela & Groden, 1978), deep pressure (Edelson et al. 1998), vestibular stimulation (King, 1991), and/or removing the person from a stimulating situation.  Exercise may also be used to reduce arousal level.
·         Frustration
Caretakers and parents often report that self-injury is a result of frustration.[2]  Commonly reported scenarios include: a person with poor communication skills becomes frustrated because of lack of understanding or because the caregiver does not understand what is said/requested; or an individual who has good communication skills but does not get what they want.
This lack of understanding certainly relates to frustration and a rise of anxiety in the PW world (in fact, in anybody’s world).
Conclusion
Maybe our management and caring for those with PWS who self-harm should have a deeper understanding of the reasons behind self-harming before we go looking for medication, or accepting skin-picking as just a characteristic of the syndrome.  I have been recommended to have my daughter assessed by a behavioural psychologist, and this I will do, but I needed to work out for myself some of the underlying reasons behind the behaviour and in so doing, would like to share this with others and hear from any of you who might have experienced the same concerns.
[1] Understanding and Treating Self-Injurious Behavior by Center for the Study of Autism, Salem, Oregon
http://www.autism.org/sibpaper.html
[2] This is consistent with the traditional Frustration è Aggression model proposed by Dollard and his colleagues (1939).
Posted by Tui Chizown at 17:31 2 comments:

I came across a card written by Francie the other day and wondered why do people with PWS all write the same?  Has anyone else noticed this?  And then I wondered whether all people with disabilities write similarly, and that led me to wondering why.  It took Francie a long time to learn to write - in any style - and she had to have a special triangular grip thing on her pencil so that she could hold it better.  Francie has never had GHT, so I don't know whether that would make a difference as far as the writing style goes, but it's never really changed over the years.

Would anyone like to hazard a guess, or offer an opinion? 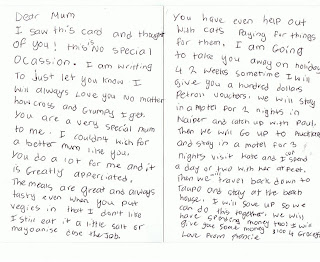