Your Christmas Shopping is now Complete

I wonder how many of you have a daughter or even maybe a son with PWS who enjoys Christmas shopping so much that unless it is done by mid-August, the world as we know it, will cease to exist? 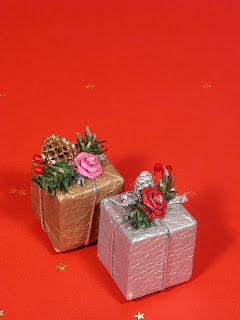 I don't know what it is - maybe it's genetic? - but it's been like this forever.  Well, ever since the concept of Santa Claus was rudely demolished by the older sisters.  This terrible news seemed to force the issue for youngest daughter (the one with PW) who took it upon her small shoulders to become utterly and completely responsible for the purchase, wrapping, and distribution of Christmas presents.  So anxious did she become that pretty soon the idea of shopping one week before Christmas became unmanageable, and it quickly became one month before, then two, then three, and now if shopping is not complete by mid-August, as I said before, the world as we know it will collapse and crumble.

Nothing has changed, as far as she is concerned, and her own shopping is, as you would expect, now complete.

So, having wrapped that lot up, she advanced on me with her brochure of Avon products, a pen, and a notebook so that I could make some detailed choices.  Nothing, it would seem, would prevent her from accomplishing the result she wanted - to sell me as many Avon products as possible, so that she could benefit from the kickback that being an Avon representative would give her.  Did I mention that she was a self-styled Avon rep?  Earlier this year, she answered an advertisement in the little local paper and signed herself up; along with her ever-patient caregiver who has been delegated a 'silent supervisor' who handles the money and oversees the distribution and collection of brochures.

Next, she advanced on her rather frail grandmother complete with Avon brochure, pen and list of people that Grandma would probably want to give presents to.  Thankfully, daughter was extremely patient and gentle and the feedback I had was that she was very thoughtful and had some excellent ideas.  For which I am eternally grateful!

When she was very little (daughter, that is, not Grandma) she would also take it upon herself on Christmas Day to distribute all the gifts to everyone.  Not just hers, everyone's.  As you might imagine, this also included the exact time when this should be done.  Which meant that to avoid a fully impacted disaster, we had to learn patience and give in to this ritual.  It was not appreciated by Older Sisters.  However, as she grew older and slightly more wiser, she has allowed this ritual to be changed to her distribution of gifts into designated piles which people are allowed to open at their leisure.  Phew!  Disaster avoided.

However, the early Christmas shopping I doubt will ever be changed and as she comes from a family whose best skill is shopping-at-the-last-minute, she will always be the odd one out... unless she manages to convert everyone to the joys of brochure shopping with Avon!