Work? I could watch it all day!

Many people with PWS have jobs - some are voluntary, and some are paid.  Some are repetitive jobs such as packaging, and some are really responsible jobs which are done well and diligently.  I remember visiting a small factory in Germany with a group of conference delegates.  We were shown around the factory by a young woman,  I didn't realise she had PW until someone mentioned it as she was so competent and so beyond the work experience of my own daughter, that I failed to realise that this young woman could handle a blow-torch, solder, and fix things as well as any other person. 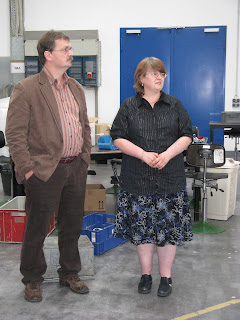 When I think about my own daughter's dalliance with the workforce, not a lot comes to mind as the following  will relay.  Not exactly a curriculum vitae, but more an account of jobs that my daughter has held even if only for a day or so and how she managed to get rid of them.  Sadly (in my opinion) what we used to call sheltered workshops have now been abandoned in favour of 'supported employment'.  (If only...)

There was a little job she had in a Salvation Army shop which required her to help sort out the clothes, help put them in the washing machine, and after they'd been ironed, to hang them on hangers as directed by one of the staff.

Unpaid, but a great little job, which, sadly didn't last for a few reasons, not the least of which were the number of items she decided would look much better on her, her friends, and various family members, rather than just be left to hang on a rack.  The main reason, though, was that she resigned because a staff member insisted on re-arranging the coat-hangers after she'd put them the way she thought they should be; according to my daughter.

Then there was a little part-time voluntary job at the SPCA which anyone who loves animals, especially those with PWS, would really love.  She did her best and uncomplainingly cleaned out smelly litter boxes, replaced water bowls,and took dogs for walks (accompanied by a job-coach).  But she resigned because they said she spent too much time cuddling the animals.

When I say "resigned", I really mean that she loudly proclaimed her thinking on what was right and what was wrong with the way things were done and that she had every right to give the animals a bit of care and affection.

Shortly after this, she decided she would 'take in ironing' and proudly showed me the advertisement she had made to pin on the supermarket notice board.  This job lasted for quite a few months and the caregivers became expert in finishing off the odd load of ironing when the pressure was on.  Of course, it dwindled to an end as she became bored with the whole idea of ironing dozens of men's shirts and the house was strung end to end with laundry.

Then there was a much more specialised job of selling make-up and products on a door-to-door basis.  Booklets were delivered to households and if they wanted to purchase something, it was ordered by my daughter, paid for by the purchaser and the money was transferred to the company.  This required much more attention to detail - as you might imagine - for many, many reasons on, oh, so many levels.  First there was the booklet of products, each and every glossy page held items of great beauty that became "must-haves" and gifts for everyone in her address book.  This meant that in the end, I seemed to be financially supporting the company single-handed as I waded through booklets marked with gifts for family and "can't-live-withouts".    Then, of course, there was the money.  It had to be kept separately until such time as it could be banked.

Now, this was rather like keeping an unlocked alcohol cupboard by the bedside of an alcoholic.  Or leaving a half-eaten block of chocolate in front of a chocoholic, or giving someone a gift and telling them not to unwrap it til their birthday.  And, of course, it all fell to bits as my daughter struggled to work it all out - in spite of all the support from caregivers, and financial instructions from her father.  She "robbed Peter to pay Paul" on a regular basis.  When it came to the debt collector, I couldn't stand it and paid off the debts and she resigned from her position of sales-person. 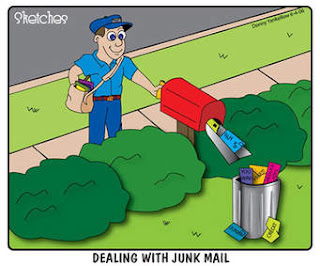 The next job was just a very simple one.  A paper run that she did twice a week.  This meant a lot of boring folding of junk mail to fit into the second-hand pram she bought from, yes, the Salvation Army, and a lot of walking and wheeling of said pram up and down many streets, putting junk mail full of grocery specials etc into mailboxes.  She was accompanied, of course, by one of her caregivers.  To begin with, the mail run took her an hour and a half.  But, as she became quicker, she managed it in less than an hour.   She got paid for this little job and the money went into her bank. Amusingly, her own letterbox had a sign proclaiming "No Junk Mail".

She would diligently read the pamphlets and ring me to tell me what was on "special" and at what particular supermarket.  She had a field day when there were free samples of cat food in small individual packets and although the great majority did actually get delivered, there were always a few left over for her cat.  Although, of course, we had to learn that lesson the hard way, too, which required a "re-delivery" of said items the next day.

Unfortunately all good things must come to an end and in this case she had a few weeks of ill health and her job was suspended and then ended.

Many people managed to hold down jobs.  I know that because I've seen them as I've travelled all around the world working for PWS.  I've longed for my daughter to be just like them, but she's just not programmed that way and the best I can do is encourage and hope.  One day, who knows, there just might be a job that fits all that work experience.  And, of course, pigs might fly! 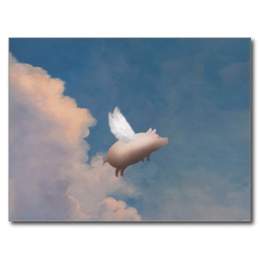