Close all the Windows on Leaving the Building

I recently visited a hospital administration unit that was located in a small prefabricated building.  On heading towards the building's exit I noticed a handwritten sign affixed to the outer door that stated "Close all windows on leaving the building".  My reflex was to block the door and distract my son (who has PWS) to ensure that he did not notice the sign.

Why did I think this sign would cause a problem for my son?  Because, like many with PWS, and indeed many people without PWS, my son finds it difficult to understand messages and concepts that stray beyond the realm of the literal.  I believe that my son craves to understand the world but finds it hard to grasp things that are not black and white.  The many social norms and unspoken rules on which the world relies largely remain a mystery to him, despite his valiant attempts (through repeated questioning and efforts to pin down uncertainties) to really understand.  Dealing with my son's frustration with the fuzziness of how the world operates is  a challenge.  However, I sympathise with people in his position who are expected to operate in a world where those of us who (seemingly effortlessly) understand cannot adequately explain how the world works to those who don't.

So, my body responded swiftly in response to my genuine concern about how my son might react  with the noble aim of circumventing a problem.  But what did my son actually say?  Nothing, in fact.  Instead, when I hastily and awkwardly manoeuvred my body to block the sign and turned around to distract my son, I saw only a slightly startled-looking middle-aged man. My son, as it happened, was not even with me that day.  Just as his anxiety so often leads to him trying to control the environment in a  way that is neither possible nor productive, on this occasion so too had mine!
Posted by Tui Chizown at 07:34 No comments:

We've just been to Cuba & Honduras!

Here are two countries where PWS is not well-known and there are no parent support groups and very little information on how to manage a child, or an adult, with the syndrome.  It is here that IPWSO has made a huge difference, offering support, information, and by visiting both countries, helping to organise the first conference in Cuba, and again this year in organising a Summer Camp, and inspiring families who have never had the opportunity to meet with others in the same situation.

Giorgio Fornasier, who has been with IPWSO for what must seem (to him) like a lifetime, has personally become involved with both countries, establishing first an email connection with a couple of doctors, then parents, then through the institution of Caritas (a Catholic organisation supporting people with disabilities) helped organise both the initial conference and then a ‘summer camp’ to which many families came to hear speakers on PWS in October this year.  His work (and his music) has been both inspirational and invaluable. 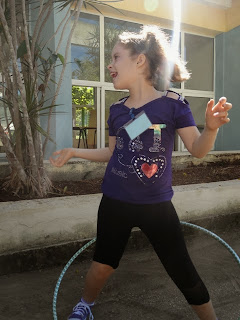 Cuba is a big island, 1.200km long where 11 million people live in 14 different provinces.  Most of the families have little income, there is no internet to speak of, and very few can afford even an old car to move around in.  The majority of people who participated in the three days “Convivencia” (summer camp) had never travelled outside their own town or province because of the cost involved.  In families where there is a child affected by the syndrome (or any other illness or disability), they are sometimes left alone to manage the best they can.  But, in spite of all the communication and public transport problems, Caritas was able to arrange the Convivencia in October this year with all families hosted in a motel, sponsored by the local Government office.  The participation was amazing! 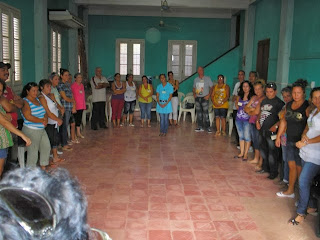 IPWSO is very much obliged to Giorgio Fornasier and his talent for fundraising through his singing.  Many of you know that Giorgio’s beautiful operatic voice has raised funds for IPWSO for many years, and this year he has put his heart and soul into supporting Cuba and Honduras.  He was also supported by Mariona Nadal, our IPWSO board member from Spain, who convened a programme for the children with PWS while their parents attended the conference.  Now, this was a first for many parents who had never been separated from their children before!  So it was with a brave face that parents said goodbye to their sons and daughters and watched as Mariona and her group of caregivers and volunteers took them on outings to the zoo and elsewhere.  There were quite a lot of text messages to, and from, anxious parents reassuring them not to worry!

The conference itself was not the typical kind of conference that the Western world has come to expect; it was a first for so many parents and as Giorgio said,

“You could feel the tension and the embarrassment existing in the large room on the back of the Cathedral where we met. In fact it was the first time they were meeting other families with the same problem and did not know each other yet. The ability of the Caritas psychologists soon overcame this situation inviting all to introduce themselves and start sharing.”

Parents were asked to form a line; those with parents with young children, leading up to the oldest.  The line was then split into two sections so that management of children and adults could then be discussed separately.

“It was quite difficult at the beginning but parents soon felt at ease and realised they had at last the opportunity to achieve answers to questions they accumulated for years.  Sometimes we had to stop people’s outburst and talking and let them often cry freely, as if a big glacier was melting.

“They did appreciate our presence as a family coming from the other side of the ocean with the oldest child of the group asking so many questions about our experience in managing Daniele and having also the possibility to ask him questions directly.

“Many of them had no idea where Italy was located in the world, but they all knew the Pope was living there and knew a lot about Italian soccer more than I do!”

The second day of the Convencia was more relaxing, after such a heavy and emotional first day, and was spent on the beautiful white beaches of Cayo Coco.  That evening, there was a Grand Gala organised by Caritas in a large theatre in town, open to the public, to create awareness about PWS. 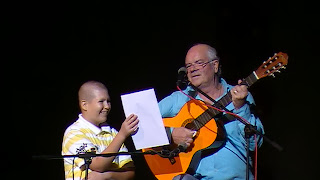 “The show started with the projection of a very touching video prepared by the local television about Prader Willi Syndrome in Cuba whose significant title was “Rompiendo el silenzio” (“Breaking the silence”).   Organisers wanted my presence to be a surprise for the audience so I entered the stage when the projection was over and sang IPWSO hymn “Fly high” in Spanish (Vuela alto) with all people standing and holding hands. Mariona said it was the most moving performance of Fly high she ever attended. As I had no music stand and could not read the lyrics in Spanish, I asked for a “human stand” and Christian, a boy with PWS, immediately jumped on the stage to do it.”

“Local television recorded the event which was broadcast with a service during the news also by the national TV. A great opportunity to create awareness again throughout this complicated country.”

There are many other people who need IPWSO’s heartfelt thanks in making this occasion one to remember.  They will know who they are, but special mention needs to be made to Dr Moris Angulo, Paediatric Endocrinologist from Mineola, NY, USA, and one of IPWSO’s Scientific Advisers, who freely gave his time yet again to helping families in need, speaking at the gathering, and playing a huge part in the sharing of knowledge to other GPs and medics in Cuba.
-------- 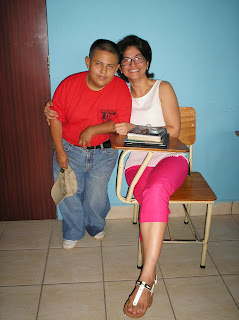 Honduras has hospitals with old structures and technologies, but again, Giorgio and Moris found a ‘big heart’ from the doctors and medics for Prader-Willi Syndrome.  He had been trying to get contacts with both professional and parents in Honduras for many years, to no avail.  This year, he was able to get an introduction to the only genetic endocrinologist, and president of the National Paediatric Society, in the country.  Along with Dr Moris Angulo, Giorgio met up with the doctors at the faculty of Medicine of the local University.

Dr Angulo gave a talk on genetics (not just on PWS) to the many doctors crowding the conference room.  Giorgio introduced IPWSO and explained the reason of their visit to Honduras and appealed to their hearts by singing a song, in Spanish, about parents hiding their disabled children at home from shame.  Both had a strong impact! 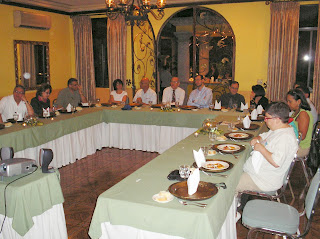 Only ten people with PWS are known to medics in Honduras, and Giorgio and Moris met seven of the families – again, a first for the families who had never met together before.  Giorgio spoke about IPWSO, and gave a personal insight into his own family and his son, Daniele, who was also present.  Daniele was questioned closely by the Honduras parents who were surprised and amazed at his intelligence, his ability to speak in Spanish and Italian, the fact that he had a job, and his life with his parents at home in Italy.

The success of Giorgio and Dr Angulo’s visit has resulted in the planned establishment of a National PWS Association, and an increased interest from doctors willing to create awareness of PWS and build a data base as new cases come to hand. 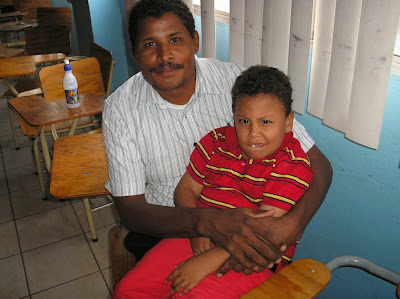