I recently subjected myself to the necessary discomfort associated with visiting a dentist and was happy to hear that I had no significant new dental issues.  However, finding no new problems for which to propose costly solutions, the dentist instead suggested I replace two existing fillings using more modern materials.  As part of the faux casual conversation that preceded the preparation of the "treatment plan" the smiling dentist asked, "so, how do you earn a living?"


I was taken aback.  I also had very little time to construct an appropriate answer given that a suspicious-looking implement was being guided towards my mouth even as the question was being articulated.

However, as I drove home afterwards I reflected on some answers I could have given... 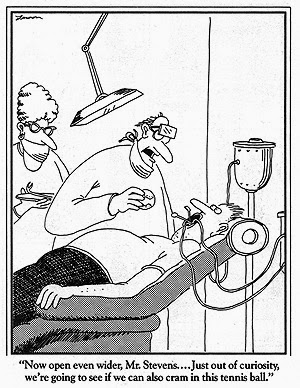 Of course, I didn't say any of these things, but instead mumbled something slightly incoherent about having young children and let it pass.  And OK, OK, in hindsight I can see that maybe I over-reacted slightly and took just a teeny-weeny bit too much offence at the question.  After all I was in a dentist's chair at the time and in a tense mood as a result.

However, even though my mood has now considerably improved, I still find the question objectionable.   I have a problem with it because it implies a norm (earning money) and hence divides people into those who conform with this norm and those who don't.  It also disregards the reality that societies generally rely on large numbers of people engaging in unpaid work, and it is these unpaid workers (people like me who don't earn) who make it possible for others to earn ... if there was nobody to look after my dentist's children then he couldn't work as a dentist.  To me, although not explicitly-stated, this question also sounds value-laden, as if earning is better than not earning. In addition, I have a problem with this because it totally unnecessarily ignores the socially-acceptable alternative means of finding out the same information.  Where I live, etiquette suggests that one should ask "what do you do?", when seeking to find out a person's work status.  This formulation gives people the option to identify whether they are part of the paid or unpaid workforce or not and gives them the freedom to describe how they spend their time.

Debate around what work societies choose to pay for is, of course, hardly new.  I think I may be particularly sensitive to questions like this because so many adults with PWS fall into the non-earning category and so, of course, may my son.  If this happens, it won't be because he has no talents or no means of making a valuable contribution to society.  In fact, I believe he can and will make a very valuable contribution to society.  However, if my society remains as it is now, the contribution he makes may well be in areas that do not attract wages.

I guess I should just advise him to visit a different dentist then ... or come up with a grand plan to change society before he reaches working age! 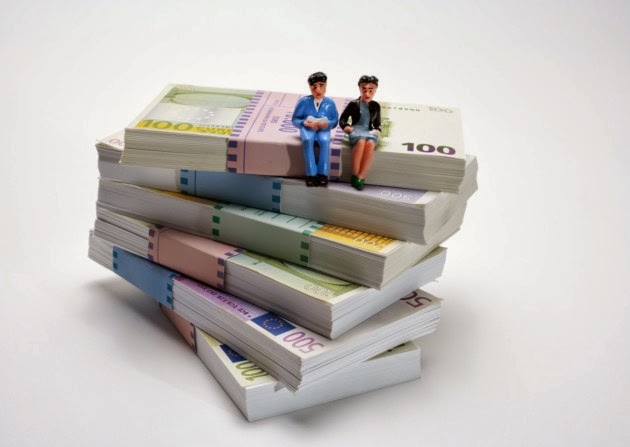