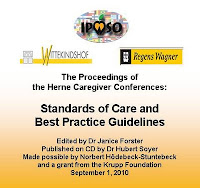 One of the most interesting things IPWSO has done over the past three years is the development of our Porfessional Providers and Caregivers' Advisory Board. This was the brainchild of Pam Eisen (our past President) and Norbert Hödebeck-Stuntebeck and Hubert Soyer.  Both Norbert and Hubert are involved with the development and management of residential homes in Germany: Norbert is Co-chair of the advisory board, along with Mary K. Ziccardi (USA) and Hubert is also on the IPWSO Board.

The production of Standards of Care & Best Practice Guidelines is a valuable resource for all residential providers, managerial and hands-on.  This manual starts from the beginning - what are the residential options/what should a house look like and provide, through to the hands-on skills required to manage the characteristics of the syndrome.  It also covers psychiatric behaviours, psychological information, dietary and physical exercise, and is the "Bible" of providers, carers, and stacked full of information for parents and teachers as well.  It's available by contacting us through our website www.ipwso.org.

New Board Members
We are delighted to welcome our new Board members: Georgina Loughnan from Australia, Anil Choubey from India,  Jose Luis Garcia from Chile, and Hubert Soyer from Germany.   IPWSO holds board elections at each 3-yearly international conference and posts are held for 2 three-year periods.  Most of our work is done via email and satelite link-up from all corners of the earth.  We meet face-to-face at our international conferences and, finance permitting, once inbetween times.

PWS Conferences
Three PWS conferences coming up!  Japan - November this year; Australia - March 2012, and UK in July 2013.  Take a look at what is on offer.  Specialised conferences dedicated to the needs of those with PWS and those who care for them, are the life-line to successful living.  Without the expertise and knowledge of those who spend their lives studying PWS, parents, caregivers, teachers, and all those who come into contact with those with the syndrome, we would be hard-pressed to know how to manage the situations with which we are faced. We are lucky in the PWS world to have many extremely knowledgable experts who have got to know not just the syndrome, but the person behind it, and his or her family.  It's this integration between professional and parent that is invaluable!

It's not easy, raising a child with PWS, managing in the classroom, finding the right residential support, and the more we can encourage parents and experts to share experiences, the better off our children will be.

Knowledge is sustainable, and PWS is unique! 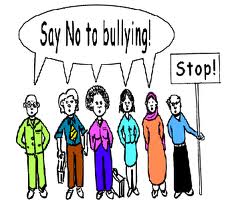 What is it in the human psyche that allows us to bully?  It seems to be a need to be more powerful than the other person; it seems to be a way of survival for some people.  Kids do it to make themselves look tough and to gain popularity.  Most grow out of it, but plenty don't; the bullying just becomes more subtle and cunning.  We've all experienced bullying in one form or another, and perhaps some of us have done the bullying ourselves.  It's not great to be at the rough end of a bully and worse when you can't stick up for yourself; even worse if you aren't part of a crowd, but are a loner for one reason or another.

Often our kids become loners, not through any fault of their own, but because their peers outgrow them and move on.  The knowledge gap becomes wider.  Being the one left behind often means a vulnerability to bullying.  This can take several forms from snide, or harsh comments, laughter, mockery, pushing and shoving.  But it can also take the form of being persuaded to do things for the fun of the protagonist.  Taunting can make our children very quickly enraged, creating nothing but amusement for the others, and often leaving our kids to take the blame.

Our children often take the blame for things going missing - particularly in the classroom - and once it is known that not only food, but anything else, can be blamed on our kids, they will carry this burden for as long as they are there.  Nothing easier to automatically blame our kids for anything that's gone missing!  Trouble is, that it often is something that has taken their fancy, and the trouble with that is that our kids are strongly into denial ('it wasn't me!!!').

If bullying is something your child is having to cope with; get help.  If it's at school, make time to talk to the teachers, make sure they understand what is happening, what it means to have PWS and how they can help and support your child.  Teach your child not to respond, but to walk away from the bully (easier said than done, I know), and to tell a teacher they trust.  Help them understand that it isn't telling tales, but that often the only way to get a bully to stop is to get help from an adult.

I've seen bullying happen in all sorts of ways, and watched my daughter having to deal with it herself. It usually takes place at the swimming pool when having PWS can attract all sorts of unkind comments and stares.  I've seen her front up to the bully and tell them she "can't help being the way I am - I've got Prader-Willi Syndrome".  It doesn't necessarily stop the taunts, but stops the bully in their tracks for a few moments!  I've heard her tell people to stop staring at her, and I've heard her use a few choice swear words as well.  It doesn't help, of course, and often requires quick intervention before she goes any further.

I think bullying has become more subtle, more hurtful, than ever before particularly cyber-bullying through texts, social media like Facebook and Twitter, and email.  It's a problem for parents and schools world-wide and it seems as soon as we think we've started to stamp it out, it flares up in another guise.  Parents are their children's best advocates, and for those with PWS, we are the lifelong advocates.  Let's stand up to bullying!

The other day my daughter, who was home with us for a few days, decided she would be very helpful and get her own breakfast.  She decided on a boiled egg and toast.  Instead of waiting for me to be in the kitchen with her, she thought she would do it anyway because after all, she was 27 and knew-how-to-boil-an-egg for-heavens'-sake.  We have gas hobs, one which is quite large and three smaller ones.  She lit the larger one and put on a small saucepan to boil the water.  As she was doing this, the flames which were high up around the small pot, singed her sleeve and burned her wrist.  Not badly, but enough to make her yelp.

When I arrived in the kitchen and saw what had happened, I naturally told her in no uncertain terms that she knew she was NOT to cook anything, that she KNEW she was not to touch the gas hob, or to even be in the kitchen without me.  She exclaimed that she "knew how to boil an egg and that anyone would know how to do such a simple thing."

"Well", she said, "I didn't know the flames were going to burn my jersey, did I?"

Which is exactly what it's all about - it's about the dysfunctional versus the functional.  It's about the "islands of intelligence" that our kids all have, but the lack of connecting bridges.  And it's this, that makes it even harder for them... so many of our adult children are quite capable of doing things for themselves, and resent being told what to do.  But so many of them, with their concrete thinking patterns, think only about the "egg" and not about what might happen if something goes wrong.

We have to out-think them all the time, be one step ahead, imagine all the possibilities, particularly all the things that might go wrong.  All the time, every day.  They can't do it themselves.