Our Guardian Angels in Israel


On May 13, 2012, our PWS Association in Israel held a charity event in honor of all the caregivers who work in our three different programs.   A charity event is the major means by which we raise money.  We have a tradition of producing an evening whereby a part of it is a presentation of our activity and the other half is a nice musical program. Usually half of the money we raise through such an event is by tickets and half or sometimes even more is by donations from people who cannot attend the event itself.  It is very important to us to meet our circle of friends face-to-face, because it is almost the only way to let the public know a little bit more about the syndrome and the treatment of those who have it.

As mentioned, this year the topic of the event was the experience of the dedicated and loving caregivers of "out of home residences".  We named them "Guardian Angels" because we know very well that they play a crucial role in keeping our children alive, and of saving  the lives of their families as well.

Each program made a short movie and one of the staff came to speak on the stage. Two of the residents spoke as well.  It was very educating to learn a little about how the care givers view their work, their protégés and their mission. And above all what they learn from being with and working alongside people having PWS. As one of them said so nicely: " It makes me a better parent to my own child".

Held this time in the inspirational surroundings of Wildbad Kreuth, the conference was host to 17 countries around the world where residential caregiving for those with PWS has been established.  The format of these conferences is based on lectures and workshops, with the workshops spanning two days.  It's here, in the smaller groups, where procedure and policy is hammered out - what works best for those with PWS?  What are the differences between countries?  How can staff best implement changes?  What are the newest ideas from everyone?  What is working well, and what needs reviewing?

This all takes time, and our workshop leaders work really hard making sure they get everyone's views and incorporating ideas and concepts into guideline format for the rest of the world.  Already there are Guidelines for Best Practice available to anyone interested, and this time the focus of the meeting was to work out how to train the trainers; what information was needed, how best to portray the information, and how to implement it.
﻿﻿﻿﻿﻿﻿﻿﻿

One of the new workshops this time focussed on sensory integration with an extra plus of having a kinaesthetic workshop.

"Our workshop was on sensory issues in PWS, and unlike the workgroups in the past, we really did emphasize the caregivers personal experience with a variety of sensory stimuli including  touch, vibration, taste, chewing gum, breathing, relaxation  and kinesthetics.  This whole conference was about experiencing the moment within the collegial atmosphere of the workgroups as well as enjoying  the wonderful sights and sounds of Bavaria in the company of friends outside the workgroups."

﻿
﻿ "The outstanding cultural program was most memorable, showcasing the band, the songs and the dancing of the village children in their ethnic dress.  An enjoyable and  productive time was had by all!"


"When I think of our time in Germany, I immediately feel the great feelings of being with such wonderful people with whom I have been sharing conferences for many years.  I look forward to the conferences for all the information, the learning, the sharing, but mostly for the people we see year-in/year-out.  It's the people with whom I have regular contact all through the year, and the relationships that have formed, are true friendships that I treasure." 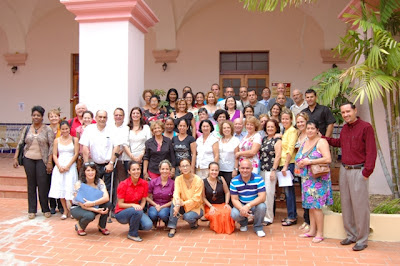 Everything started 3 years ago when a doctor from Cuba contacted IPWSO through his brother in law who lives in Sweden. He wrote to us saying he needed help to confirm the clinical diagnosis made to his 4 year old daugther, as this was not possible to be done in Cuba. The methylation test confirmed the diagnosis and that his daughter had UPD. The doctor immediately asked for information and educational material in Spanish, which we provided, and expressed the wish to participate to a PWS Scientific Conference somewhere in Europe to learn more.


IPWSO invited him to join the International PWS Conference in Taiwan in May 2010 instead and covered all his travel costs, while Cuban authorities and especially the Ministry of Health of his country helped him a lot to get the passport and the permission to leave Cuba. As soon as he returned home, so enthusiastic and full of information, he organised a 1st workshop for professionals and parents in his own town, hosted in a room of Caritas, as this Catholic organisation is very active in assisting disabled people throughout the country.

The young doctor, and his wife, who is a psychologist specialising in teaching children with disabilities, have agreed to represent IPWSO, and so Cuba became a member of our International Organisation. They asked Caritas to help them find cases throughout the country, spreading the voice to their branches connected with the various parish churches. In a short time they found 15 patients and especially many doctors and professionals interested to know more about this syndrome.

Once Caritas offered to host a National Workshop open to professionals and parents and to help families financially to join La Habana, we were contacted again for help to find professional speakers in the Spanish language from Latin America and Europe. The key speakers accepted the invitation with enthusiasm and covered their own travel expenses. We owe much to them: Dr. Moris Angulo (El Salvador-U.S.A.), Dr. Maria Del Valle Torrado, Dr. Hugo Serdloff, Karina Abraldes (Argentina), Irune Achutegui (Spain-Italy), Dr. Fanny Cortes (Chile). They covered all important aspects of the syndrome such as genetics, endocrinology, pediatrics, psychology and psychiatrics.

Local parents appreciated also the presence of parents coming from other Spanish speaking countries representing IPWSO network: Luis Barrios and Mayra Urizar from Guatemala, Julia Bonelly from Dominican Republic, Fernando Briones and Mariona from Spain and Giorgio Fornasier from Italy. All scientific speakers modified their own presentations to be understood by parents and this was highly appreciated by Cuban professionals too, because they learned how to approach parents with scientific and medical issues in an easier way. The priority was given to parents, to their questions and especially sharing experiences. During breaks and meals local doctors had the opportunity to talk about scientific details with foreign speakers directly.

The 2nd Workshop on Prader Willi Syndrome in Cuba was held from 27 until 29 April 2012 at the Sacaerdotal House in the Capital La Habana, under the precious umbrella and organisation of Caritas Cuba. Everyone slept at the same house where the Conference was held and had meals at its restaurant, so there was plenty of time to stay together till late at night. The meeting room had equipment for video presentation and became more a sort of a family sitting room, than a Congress.

The picture shows the smiling group that participated to the Workshop and among them there were parents who were visiting La Habana for the first time and they did not know each other.

It was touching to meet the oldest patient with PWS in Cuba, a 42 years old woman who was diagnosed by Dr. Prader himself when visiting Cuba years ago. Everyone cried listening to the mother of Manolito, a 19 years old boy who died some months ago. Manolito’s mother came to honour the memory of her son with her presence and participated in the discussion and sharing. At the end she told everybody: “Don't miss the unique and precious opportunity you had and what you learned at this fantastic meeting. Work hard and let other Cuban children with PWS live!”