A tale of two haircuts

When my son, who has PWS, was 6 he cut his own hair.  It was a fairly innocent event.  He had been using his scissors for some artwork and then, unbeknownst to me, decided to play barbers by lining up his stuffed toys and cutting their fur.   After the camel he ran out of toys and, unwilling to abandon the game, turned the scissors on himself.  The result brought to mind a dog suffering from mange.  I was horrified. 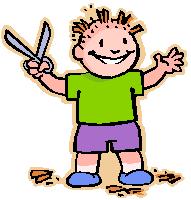 But the barber, to whom I promptly escorted my son, laughed at my concern and reassured me that this was normal behaviour.  According to him, my son was only one in a long line of children who required a #1 blade haircut to disguise their own attempts at barbery.  This view was echoed by several friends who all seemed to have personal experiences of children doing precisely the same thing, usually right before occasions at which they needed to be photographed.

So I told myself to chill out and moved on.

This Christmas day, when my son was 11, he cut his hair again.   This time was different.  He had struggled for weeks in the lead up to Christmas with anxiety about presents, food, visitors, holidays and who knows what else.  On the day itself he had managed to cope (more or less) until dinner was over and then retreated to his room for some quiet time.  I had assumed that he would distract himself with a jigsaw or word puzzle until bedtime and that the worst of his stress was over.  But instead he found a scissors and attacked his hair.

I found him midway through the assault and removed the scissors, swept up the hair, suggested an alternative activity for him and hurried to warn the visitors not to comment on his new look.
I knew that this time my friends would not chide me for being uptight and tell me that "every child does that".  So, I didn't tell them.  This time there were no jokes from the barber either.  Whereas my son's first self-administered haircut was a childish game, this one looked like self-harm.  It made me fearful of what he might do in future and whether the distress that had led to this incident might someday lead to him seriously hurting himself or others.

None of these are very pleasant thoughts.  But, of course, there is always something positive to be found if one looks hard enough.

When my son was 6 I doubt I had even heard of the importance of low expressed emotion, but this time I succeeded quite well in maintaining a cool facade.  When my son was 6 I not alone felt horrified at his haircut, but I also let him see this.  This time I felt sad but not horrified.   This time I didn't waste my time or his by asking why he had done it or chastising him for it.  Instead, when he was calm, he and I agreed that from now one we would keep the scissors in the kitchen, which is locked, and that he would only use a scissors when there was an adult present.

Strangely, this time I felt better able to cope than I had felt when he was 6 and behaving "normally".
And, despite the ongoing negative impact of PWS and anxiety, overall I think that everyone in our house had a pretty good Christmas.