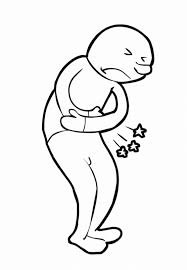 Not the most exciting topic for a blog, I know, but it is becoming more and more often described and reported in PWS, especially in adults and often found in the older generation. And why is this something that we are now much more aware of and why did we not talk about this just a few years ago?
The other week my daughter developed strong stomach pains and was taken to Accident and Emergency at the local hospital.  She had to wait some time to be seen, but when she was finally examined by a doctor, she had an x-ray, was admitted to a surgical ward, and settled down for the night under watch for possible appendicitis.  Her caregiver stayed with her for the entire time (blessings poured upon her!).  I was phoned, but slept through the call and it wasn't until 5.30am that I learned of the previous night's happenings.
So, armed with my usual information about PWS, I drove to the hospital and went to talk to the doctor to find out what was going on.  This took practically a full day before I was able to talk to anyone or find out the results of a second scan.  My daughter was calm, but still in pain.  She was "nil by mouth" for quite a few hours until the cat-scan, but fortunately that didn't faze her - probably because she was on morphine by then and very sleepy.  This scan showed swollen lymph glands around the appendix and, because nothing else had shown up, this was thought to be caused by a virus and presenting as possible appendicitis.  After two nights, my daughter was released from hospital.  However, the pain did not cease and once again she was admitted to hospital.  Here, at my bidding, they looked further at the rectum and found "some backup".  This time she was discharged with a laxative and instructions to have "Kiwi crush" in her diet (this is Kiwi fruit pulp which is like a smoothie and is recommended for those with constipation problems).  Since then she has been just fine and thoroughly enjoying the 'extra' food in her diet!
However, this is the second time she has had this kind of problem and, after emailing with Dr Susanne Blichfeldt, I decided to write a blog about the importance of understanding constipation in PWS.  Susanne has written some really important information that needs to be understood by not only parents and caregivers, but by the medical profession as well.  She writes:


“Thanks to better care, our knowledge of the adult PW population is growing and thanks to more detailed investigations when adults with PWS are ill, or die, we are now becoming more and more aware that stomach and intestines in PWS often are the organs that cause severe disease or even death among adults with PWS.

"Still, there is a lot that we do not know about the functions of these organs in PWS, but a start is that we are now aware that early treatment of often not very clear symptoms can be lifesaving.
"The “control” of the bowel is under the influence of the autonomic nervous system, which can be described as the part of our nervous system that we cannot control or are aware of, as we are with thinking, motor function etc.
"The autonomous nervous system is also under influence by hypothalamus, the function of which seems to be abnormal in many ways: like appetite and hormone control.
"The autonomous nervous system is under influence of stress, and we must also consider if problems with stomach and intestines  can be, at least partly, ascribed to a stressful life for a person with PWS
"So attention is needed, and all caregivers and parents are recommended to think about constipation as a possible risk of severe illness and also perhaps the explanation for situations with unclear symptoms of malaise.
Often caregivers/parents  answer “no” when asked if the adult with PWS suffers from constipation, but  one point is  that the evacuation of the bowel is something that is not taken notice of, and the adult with PWS does not complain.
"Another thing is that regular toilet visits can not exclude constipation. If only a small amount of stool is delivered, there might be more filling out the rectum.  The stool then backs up.  A slow emptying of the stomach can be a symptom of constipation in PWS. A prolonged passage-time through the intestines seems to be the case in adults.  The result is a constipation build-up in the bowel that ends up to become painful or gives unspecific symptoms from the abdomen.  Then the adult with PWS is referred to hospital but it often takes time to rule out the reason for the symptoms.
"Moreover many do not feel very much pain, even do not complain, but caregivers/parents see that something is really wrong.
"A study has shown that around 50% of adults with PWS had a prolonged passage time, some of these the double the normal (3 days compared with 1½ day: which is the normal time from when you eat until “it leaves you again”).  The participants with PWS in this study were not treated with antipsychotics, and Hormone treatment was not related to the passage time.
" Like almost all other symptoms in PWS, constipation and delayed passage is a problem for some, not all." 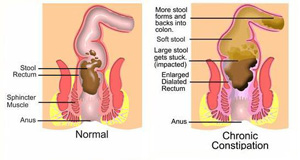 So, I have already learned a great deal.  What else?  Well, by trolling through the internet I have learned that there are several things that can cause constipation apart from the obvious such as not having enough fibre in the diet, or drinking enough water, or a lack of exercise and repeatedly ignoring the urge 'to go'.  And, of course, these are pretty fundamental issues, particularly the last two, to PWS. But there are other things that can also help cause a blockage in the system and they're worth mentioning so that we get an idea of the whole picture.


“Motor inactivity: probably the most serious symptom in PWS: and inactivity is one of the most well-known causes of constipation.
"Studies show that people (adults) with PWS spontaneously move less than others.  And over a week-even with many planned exercises, the sum of moving is less than normal also compared to other syndromes with intellectual disability.  Spontaneously many persons with PWS seek the chair instead of the stair!
"We have no data yet telling if those with PWS with a slow passage time are more inactive than others with a normal passage time, and no special data on their diet, we know only that those who participated in the study were living in group homes with control of food.

"Motor inactivity is the most simple to treat: : but it demands that you (caregiver, parent, friend, sibling) also move!
"So, walking at least ½ hour 3 times a day after each meal - this can, for many, prevent constipation.
"It is necessary to have a dialogue with the person with PWS. It can be a good idea to have a calendar in the toilet, marking each time there has been a bowel movement.  Check to see what the stool looks like …"

So, what exactly do normal stools look like?   I went looking, and now some special information to share with you -  the Bristol Stool Chart designed especially with this in mind and it looks like this: 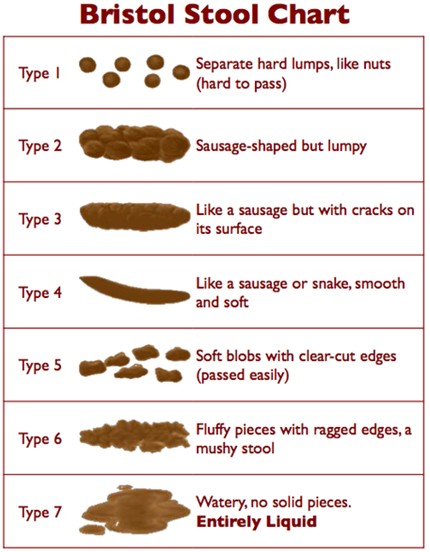 Not exactly dinner table conversation, but Type 4 is what we're aiming for and, obviously, Type 1 is when constipation may become an issue.

WHAT TO DO NEXT

First of all we have to be aware that constipation is often not recognised in PWS, and  it can cause severe abdominal problems.
Many cases seen with severe stomach distension also had severe constipation, and not recognised before the person was hospitalised.
We need to talk openly about this, and in any situation where there are complaints, first question should be: bowel function, and not only if the person can manage toilet visits themselves, but also how often and how does the stool look like?”
So, there are several things that can be done, ranging from the gentle (a nice cup of tea), to the more invasive (enema).  To start with, acupressure, tea, and probiotics can be very helpful with tummy problems.


Finally, I would urge you to share this information with anyone else who cares for someone with PWS.  It's important that we know about constipation as there are many gut issues that seem to present in slightly different ways from the usual and the more we are aware of these, the sooner we can treat them and have the patient back to normal.

Finally, as Dr Blichfeldt points out, if you have PWS you live a life often filled with mental and physical stress and if stress is an indicator of constipation, then why wouldn't this be a very real issue in Prader-Willi Syndrome? 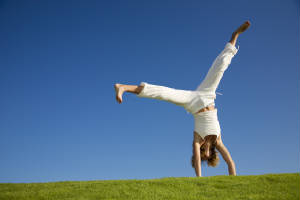