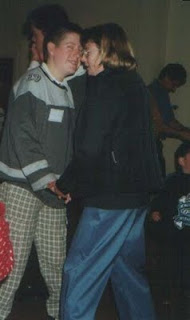 In the past we swept the subject of sex under the carpet.  We knew that women with PWS menstruated infrequently, if at all, and that males were infertile.  Also, in those days, sex hormone therapy for males and females wasn't really an option, so the whole chapter of sexuality was closed for many years.  It was rudely opened in 1999 when the first birth of a healthy baby girl to a woman with PWS was recorded in Sweden.  This was followed in 2001 when a 32 year old woman with the deletion diagnosis was recorded as having given birth to a baby with Angelman’s Syndrome, in Denmark.  The third recorded birth was in New Zealand in 2004 when a baby girl also with Angelman’s syndrome was born to a young woman with a genetic deletion diagnosis.

Sex hormone therapy is now recommended for both males and females with PWS.  This “encourages the development of secondary sexual characteristics and potentially improves bone mineral content and density”

http://books.google.co.nz/books?id=Js81Pr1PmaAC&pg=PA171&lpg=PA171&dq=women+with+PWS+given+birth+to+child&source=bl&ots=WdkaahgMa7&sig=qYzjIz18-NjJaRKkzGGd5nKB8t0&hl=en&ei=kXERTsybAtHPrQeU-oCIBA&sa=X&oi=book_result&ct=result&resnum=4&ved=0CCsQ6AEwAw#v=onepage&q&f=false
It will also induce menstruation and the likelihood of pregnancy.  This means greater observance of lifestyle, good sex education and support, as well as a better understanding of how to cope with the resulting birth.  It is also recommended that males have testosterone therapy, and many youngsters are on growth hormone therapy and may well continue to be on GHT into adulthood.  Combined with sex hormone therapy, could this mean an increase in fertility? What about sex itself?  Marriage, even?

Back in 1999 I visited a residential home in Seattle where a couple (both with PWS) were engaged to be married.  I asked the young man why he wanted to marry, and his reply has stayed with me ever since…”because I want to see her in the shower”.  I don't know whether they married, or whether they just lived together.   I know of another couple in Australia, she with PWS and he, not, who married.  I don’t know the reason behind that one!

It used to be thought that marriage was too serious a contract for a person with an intellectual disability to enter into and that a person with PWS would be likely to walk out at the first sign of a melt-down.  Same as it was thought that a person with PWS should not drive a car as they would probably have road-rage.  However, I know of two people who have their driver's licence and have held them for quite some time, content to potter around their local town on their own.

Many of our young people want to experience a close relationship to "have" a boy or girlfriend, and nearly every young woman with PWS that I have met expresses a desire to have babies, to look after babies and to have them to cuddle and hold.  Most have a fine collection of dolls, or soft toys and many are genuinely wonderful with small children and babies.  However, I know from talking with the young woman's family in New Zealand, that there were many difficulties involved, even from the beginning when no one knew she was pregnant until a visit to the doctor in her last trimester brought the surprising news.  Birth was by caesarian section as they did not think the mother would be able to tolerate a natural birth.  The mother was overjoyed to have her own baby, but not so overjoyed when the baby cried and interrupted her dinner time.  Neither did she prove a natural mother able to care for a small baby or answer its constant demands nor did she express great interest or maternal instinct.


What she did want, however, was for her baby to grow up quickly so they could live and travel together.  The baby has Angelman's syndrome and is cared for by the grandmother and sister while the mother is in residential care.  She does have regular contact with her natural mother, but the daughter's relationship, as one might imagine, is closer with her primary caregivers.


Somewhere along the line there has to be an extra element of responsibility and care from parents and caregivers alike.  There still needs to be educated and intelligent management and support around such important decisions as choosing to share your body or life with another.   There have been many changes in the way we care for and manage the lives of those with PWS, and doubtless there will be further improvements as we understand the needs of those with disabilities.


At the end of the day, I expect every parent will share the same thought, regardless of whether there is a disability or not; "I just want my son/daughter to be happy", but let's make sure we know what they want, and how we can ensure that happiness and support.
Posted by Tui Chizown at 16:35