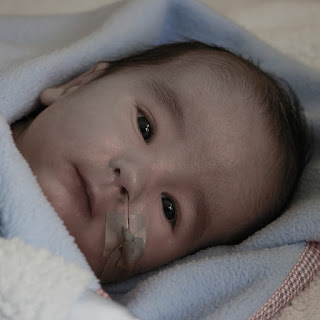 So, let me introduce you to another young Australian who, like his namesake, will battle the system and never give up, and will always have a band of loyal followers ... meet Tobias Arnold Ned Kelly, born on February 27th, 2011 in Canberra.  Anxious to arrive in the world, he made it 6 weeks early.  Diagnosis came  5 weeks later when a chromosomal study was done straight after his birth.


His parents, his brother Clancy, and sister, Grace, live four hours away from Canberra in southern New South Wales.  His mother, Maria, is a photographer (as you can clearly see!).

Tobias spent 6 weeks in hospital, he was fed with a nasal gastric tube for several months, although now at 7 months, he is tolerating solids pretty well.  A sleep study is going to be done so that he can start on Growth Hormone Treatment.  Maria says, "Tobias is an extremely placid baby and we are enjoying his brief giggles and smiles, now that he's a little older. 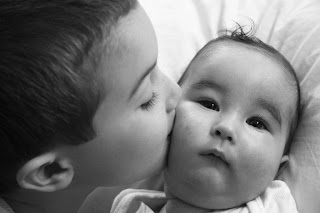 "His sister, Grace, and brother, Clancy, dote on him daily and he recognises their voices and presence with his gorgeous eyes."

Maria is keen to link up with parents in Australia, and around the world.  Networking and sharing stories is one of the most powerful supports you can offer another parent, so I hope you will contact her via our Facebook pages.
Posted by Tui Chizown at 10:38