I have a confession to make, and this might be seen as a long moan about PWS and food, but....  my son (who has PWS and is 9) is thin.  In fact, he is not just thin, he is very thin.  The descriptors scrawny, slight and spindly all seem appropriate.  And that's with his back brace on.   With it off he looks even more fragile.  Most of the time I think my son looks like he needs a good meal.  If asked, no doubt he would agree!

I say this neither as a boast nor to suggest that my family has somehow mastered weight management in PWS.  My son, after all, is only 9, and I do not assume that his weight will always stay like this.  But, right now, he bears no resemblance to the overweight children with PWS whose images I was introduced to when he was diagnosed.

One might think that my son's weight (low, but appropriate for his height) would be a cause for celebration.  And, certainly, I am happy that he is not carrying excess weight.  But I have concluded that being thin with PWS also causes problems.

For a start, it's very hard to convince non-professionals to take hyperphagia, the threat of obesity or even stomach necrosis seriously when the only person with PWS they have ever encountered appears as my son does.  I routinely encounter extreme skepticism when I explain that my son must have less food than others, cannot have any junk food whatsoever, and cannot be granted unrestricted access to food lest he binge.  When, on rare occasions, we eat in restaurants and I begin by removing half the food from my son's child's portion I fully expect to encounter raised eyebrows.  More worryingly, I suspect that even some family members don't fully believe my assertions about the need for such a strict food regime, despite my having repeated the message at every available opportunity.

In addition, and ironically, the manifestations of hyperphagia that are visible are often attributed to the restrictive diet imposed by Mom and Dad, rather than seen as evidence of hyperphagia itself.  So, when my son scrapes his fork off his plate 30 times after every meal to ensure that he hasn't missed anything or demands an extra pea because one has escaped from his plate, this is interpreted (along with his skinny stature) as evidence that he isn't getting enough to eat. 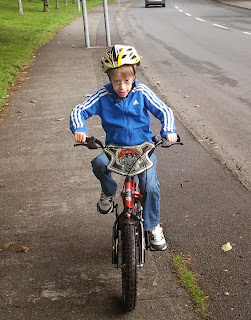 Not being believed doesn't particularly bother me on a personal level ...I know enough to know that managing my son's food is the right thing to do.  But it bothers me because if people don't accept the reality of hyperphagia and the need for calorie control then I can't allow them to mind my son.  So, for the most part, he can't attend groups or parties or stay with family members without me or his father shadowing him all the time.  It bothers me too, because if I am not believed in relation to these issues regarding my son's care then I might not be believed in relation to other issues regarding his care either.

Whereas, in my experience, non-professionals find it hard to believe in hyperphagia and the threat of obesity, I also fear that many professionals can't see beyond them.  I recall one such doctor cheerfully welcoming my son into his clinic by saying "I don't even need to ask how you are, I can see just by looking at you".  Excuse me! What about his skin-picking, perseveration, anxiety attacks, sleep apnoea, low muscle tone and scoliosis?  Do none of these matter as long as he is thin?

The reduction of PWS to one element bothers me too because I need professionals to support my son in relation to all his needs.  If hyperphagia and obesity are seen as the key problems associated with PWS and these appear under control, then that offers a rationale for service providers to start denying services.

The saying, "a little knowledge is a dangerous thing" seems very apt to me when it comes to many of the professionals my son meets.  No knowledge at all, coupled with skepticism towards my explanation of PWS, on the part of non-professionals is equally worrisome.  However, I have concluded that the biggest problem is neither skepticism nor ignorance of the range of PWS issues, but an unwillingness to learn that might be - just might - due to plain old laziness.  The truth, of course, is that PWS is complex and if people with PWS and their families are to be really supported, then we need both professionals and non-professionals to accept this and, ideally, educate themselves about PWS.  Or, if that is too much to ask, at least believe the stories we tell about PWS and how to manage it.

Sorry, but I did warn you that this was a moan!
Posted by Tui Chizown at 09:39