How can I trust you, now that I know your ways?

Trust is, I think, one of the most difficult things to, well, to trust.  It's hard enough in the real world, let alone in the magical world of PWS.  Or even one's other children, come to that.

There are plenty of lovely sayings about how we should trust our instincts, trust each other, trust our partners etc.  But if that trust is broken, it is one of the most difficult things to repair.  As far as trusting our kids with PWS, well, we tend to trust with our fingers secretly crossed behind our backs; we hope for the best, we pray we've made the right decision ... and I remember when I trusted her (after plenty of persuasion from her) to go down the road to the library on her own.  She persuaded me that she would go to the library and only the library and would get books out and walk back home.  It wasn't far and she didn't have to cross road and besides, it was good exercise and she had to carry the books home.  For the first couple of times she did exactly as she promised and the trust between mother and daughter built up accordingly.  The following week, however, she was becoming a little late with returning home and I thought I would walk down the road to meet her.  I ended up walking the the whole way to the library.  I walked in; couldn't see her diligently searching for books, but I did find her curled up in a bean bag happily reading, with a large bag of sweets at her side.  Admittedly she was sharing these with a cluster of small children sitting at her feet, but a good many had been consumed by her already.  I suspect the money came from my handbag, something I no longer ever leave around.  It gets locked in the pantry, or locked in the car when she comes home these days.

After talking severely to her about the disappointment of having the trust broken, I decided it would be cruel not to give her a second chance, so when she asked a few weeks later if she could take the dog for a short walk down the road I was rather surprised to hear the phone ringing about 5 minutes later.  It was the neighbour from over the road who asked if I knew my daughter was "collecting for the church". 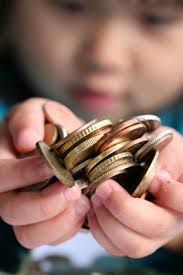 Another lecture from me about trust, right and wrong, annoying the neighbours and whatever else I could think of to hammer home the message.

When will I ever learn?  Obviously it is going to take a while.  There have been plenty of incidents since then: she tested the other side of the street, "collecting for Girl Guides".  And then as the years went by, she grew more cunning and her latest scam (what else can I call it?) is to take back things that I have bought her to the shop and ask for the money back.  The only way I can overcome this is to mark anything new with a highlighter as she is just so quick to convince the shop-owner "Mum bought the wrong thing..."

There is a huge amount of advice out there about trusting your children, cutting them some slack, to stop putting high expectations on them (which apparently leads to their becoming stressed), and to assume the best and trust your child and believe in their inherent goodness. Well, I'm going out on a limb here and saying, don't trust your child; it can just be too much for them.  Too much temptation; too much freedom; and way too much slack.

You know, I think that this is one of the most difficult things to deal with because we long to trust with all our hearts, but we know full well that to do so is setting the person with PWS up for failure.  Big time.  They can't help doing what they do best; survive.  Their whole being is driven by the need to find food, find money, find whatever it is in their lives that they have decided they must have in order to survive, and if I just open the door and say "go for it; I trust you", I am doing my daughter the biggest disservice in the world.  I know she won't thank me for it - ever - but I can't trust her, and I won't trust her.  It's sad, but she's proven that she can't tolerate the stress of being trusted, or being caught out, so it's up to me to do something.  The boot is clearly on the other foot - it is I who must be trusted by her, not to let her down, and not the other way around. 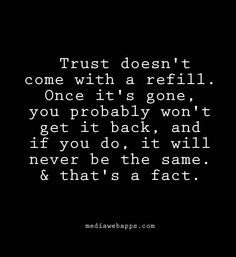